What is Malta’s Taxation System

How does Malta’s taxation system work?

Today, we’re going to talk about how you can get a European residency, access to the EU, and lower your tax burden at the same time.

While Malta is not a zero-tax or even low-tax country, the Malta tax system allows Maltese new residents to take tax exemptions that can lower their tax rate significantly.

In this article, we’ll discuss: 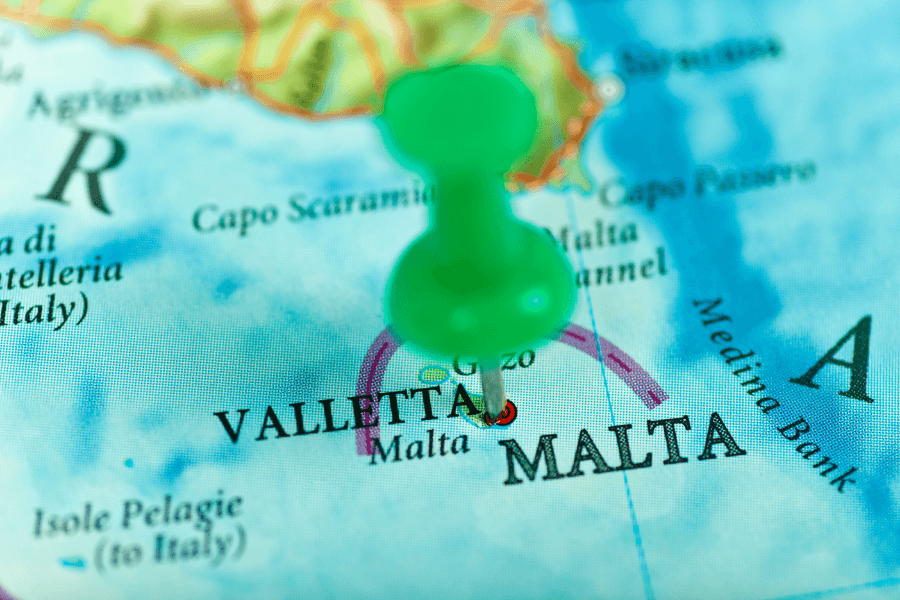 Malta is an island in Europe, south of Italy.

Is Malta a Tax Haven?

A tax haven is a country that levies little or not tax. These are the countries you can go to for tax relief and more financial freedom. But is Malta a tax haven?

Malta is not a tax haven, with its income tax rate being as high as 35% in the top bracket. So why would anyone want to spend time or incorporate a business in Malta?

Malta’s tax system is a little unique. If you structure your tax planning correctly, you can greatly reduce your tax burden in Malta.

How can you turn Malta into a tax haven that works for you? If you understand the Malta tax structure, you’ll realize that you can reside in Malta and pay zero tax.

When can you file your taxes in Malta?

The tax year in Malta ends on December 31. Your annual tax return needs to be filed by June 30.

Malta has a progressive tax bracket system that ranges from 0% to 35%. Earnings of €60,000 or more is taxed at 35%. Income tax is paid by Maltese citizens, residents, and non-residents earning money within the country, though what is considered taxable income is different based on your residence status.

Married couples in Malta are required to file their tax forms together. The couples then can choose if they want to pool their income and pay the married couple tax rate or be taxed as separate individuals.

Malta does not have any inheritance tax, wealth tax, or gift tax.

Who Has to Pay Taxes in Malta?

Do you have to pay Maltese taxes?

Maltese citizens who are residing in Malta have to pay tax on all of their worldwide income.

Non-residents of Malta only have to pay tax on income earned in the country or chargeable gains earned in Malta.

If you (or your company) have to pay taxes in Malta, you’ll need to get a tax identification number through the Ministry of Finance.

If you are a Maltese citizen, resident, or even non-resident who is earning income within Malta, you’ll have to pay an income tax. What is considered taxable income is dependent on your residency status and domicile.

Malta has a tax structure that allows new people who have tax residency in Malta to lower their tax rate to 15% on income sourced within the country. Tax residents are those who qualify under one of Malta’s residency schemes but are not Maltese domiciles. Tax residents only have to pay income tax on income that is sourced in Malta or remitted to Malta.

Ordinary residents in Malta will pay a progressive rate of up to 35% on their income source in Malta and foreign earned income remitted into Malta.

Maltese citizens pay income tax on all of their income both foreign-sourced and Maltese sourced. The amount is based on a progressive tax bracket system.

Here are the tax rates for a single individual in 2020:

Malta has double-tax treaties with 70 different countries. These treaties make it so that a country cannot tax you on income that has already been taxed by the other country.

Still, Malta does have some tax exemption and reduction policies that may be worked into your global tax plan.

If you are a shareholder of a Maltese company and a Maltese tax resident, you will get credit for the tax that the company pays on any profits that are distributed as dividends through the Maltese imputation system. This means you won’t have to pay income tax on these dividends as they were already taxed. Excess credits can be refunded.

Another tax exemption in Malta is the Participation Exemption. This exemption applies to dividends from holdings and gains from holdings being disposed of. It also covers domestic holdings of shares and capital gains that were received from a transfer of a participating holding.

If you are living in Malta and operating a Maltese company, you’ll be paying high corporate taxes. However, by using Malta’s tax exemption you can lower your corporate tax rate to 5% or less.

What is the cost of living in Malta?

How to Get Maltese Residence and Citizenship

There are multiple ways you can go about getting your residency or citizenship in Malta.

Maltese citizenship can be a great option for people who are looking to access Europe and the Schengen area.

Malta has a residence program that is only open to nationals of the European Union (EU), European Economic Area (EEA), and Switzerland. To qualify you’ll need to be fluent in either English or Maltese, pay a 6,000 euro registration fee, and have a clean criminal record.

You’ll also need to be able to prove that you are self-sufficient by providing your financial records. You can either buy or rent a home in Malta. If you buy a home it needs to be worth a minimum of 275,000 euros. If you are renting, you’ll need to pay at least 9,600 euros in rent annually.

Residents through this program will also not be allowed to spend more than 183 days in any other jurisdiction and will need to pay a 15% income tax on income sourced within Malta.

This program is similar to Malta’s other residence program, except it is designed for everyone outside of the EU. Those who have residency through this program are required to visit Malta at least once a year.

In most countries, you can get residency if you have been hired by a company within that country to come and work there.

In Malta, those with specific qualifications and job titles can get residence and tax benefits through Malta’s tax guidelines for Highly Qualified Persons. You’ll also need to be able to prove your professional qualifications and experience and earn a minimum salary of around 85,000 euros.

Malta has a specific residency for retired persons. To qualify you need to have at least 75% of your annual income sourced from a pension. You also will not be permitted to spend more than 183 days in any other jurisdiction.

To register for the program, you have to meet all of the requirements and pay a one-time fee of 2,500 euros.

Malta offers an option for residence for individuals who are financially self-sufficient.

For nationals of the EU, EEA, or Switzerland, you’ll need to have a bank balance of at least 14,000 euros, make at least 92.32 euros in income each week, and have a private health insurance plan with coverage throughout the EU.

You’ll need to have already lived in Malta for at least 2 months before you can apply.

If you are not a resident of the EU, EEA, or Switzerland, you can apply with the same requirements, except you’ll need to have at least 50,000 euros in capital, not 14,000.

After you get temporary residency in Malta, you can spend time in the country and work towards a permanent Maltese residency, and possible citizenship.

Malta has one of the best citizenship by investment programs.

A Maltese passport not only gives you access to the Schengen area of Europe but also grants you one of the world’s most powerful passports.

The greatest downside to this program is the cost. Malta’s citizenship by investment program is one of the most expensive CBI programs in the world.

If you’d like to get citizenship for your spouse or kids as well, it costs 50,000 euros per dependent.

Malta can become a tax haven of sorts if you understand and take full advantage of Maltese tax exemptions.

Tax-residents of Malta only have to pay taxes on income sourced within the country or remitted into a Maltese bank account. This means you can live in Malta and pay zero tax as long as you earn all of your income abroad and do not remit it into a Maltese bank.

If you’re interested in using Malta in your tax plan, there are many options for obtaining residency, or citizenship within the country. However, be aware that as a Maltese citizen, you’ll pay more taxes than you would as a Maltese resident.

WHAT TO READ NEXT